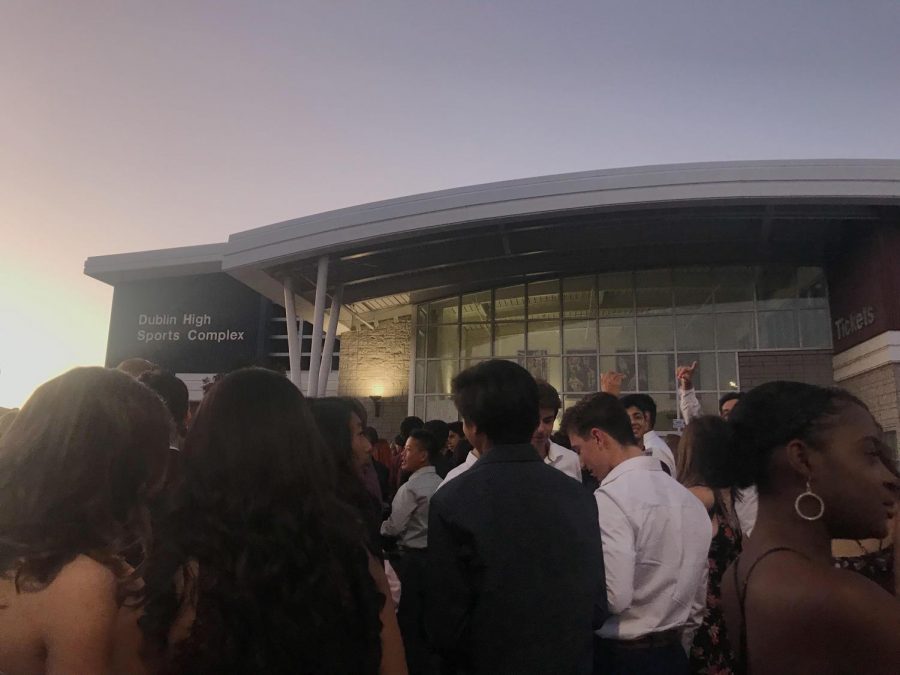 While some found the long lines to frustrating, most students passed the time chatting with friends and felt that the dance was well worth the wait.

At 7:00 pm on October 5th, 2019, students of Dublin High flocked to the school’s Sports Complex for Homecoming Week’s long-awaited finale: the Homecoming Dance. Donned in their best attire, everyone was ready to have the night of their lives with their friends or dates.

Even at 6:40 pm, the lines snaked all the way to the parking lot. While the front of the Sports Complex was filled with excited chatter, loud complaints about the long lines were also very audible. Students who donated three cans of perishable food were given the privilege to bypass those in the regular lines though.

Colorful lights and bass-boosted music gave the setting a vibrant atmosphere. There was also a photo booth for students to take pictures with their friends using fun and wacky props. As students began to crowd together in the Sports Complex, more excitement began to spread among students. Although some chose to simply chill near the bleachers, the mosh pit was where students were having the most fun, partying at the top of their lungs. Right in front of the DJ, many groups were seen dancing and singing with unbridled enthusiasm.

The fun was certainly not diminished outside. There were arcade games, a silent disco, and tables where students could take a break. A Mustache Mike’s Italian Ice food truck was available for students to buy refreshments from, but many were unsatisfied with the lack of proper food. “I think it’s really lame they just have shaved ice. That’s basically just flavored frozen water. We need actual food; we’re hungry and we’re dancing, right?” one sophomore complained. Freshman David Michetti also said that “it [was] fun dancing with my friends. I also see people I don’t usually talk to but the atmosphere makes it easier [for me] to socialize with them,” but he wasn’t sure it was worth the price of tickets.

When asked about her thoughts regarding enjoyment and refreshments, freshman, Tanvi Singh added that “the music could be more upbeat and there’s not enough variety [of genres]. I only hear rap music playing. There could also be more food.” On the other hand, senior, Bella Rodman said, “[I definitely enjoyed it], because I danced pretty much the whole time and got to take pictures with my friends. Out of all the 4 dances [I’ve been to], the music and games this year were the best.”

At 10:00 pm though, everyone was starving and sluggish from the long night. Most students went straight home to catch some sleep, but some groups headed over to restaurants like IHOP and In-N-Out to fill their hungry stomachs.

All in all, the dance was a great platform for everyone to socialize and have fun with their friends. The dance also gave everyone a chance to take a breather from the usual rigor of academics. Though some felt that certain aspects of the dance, such as the variety of food and music could definitely have been improved, many agreed that it was overall an enjoyable experience.