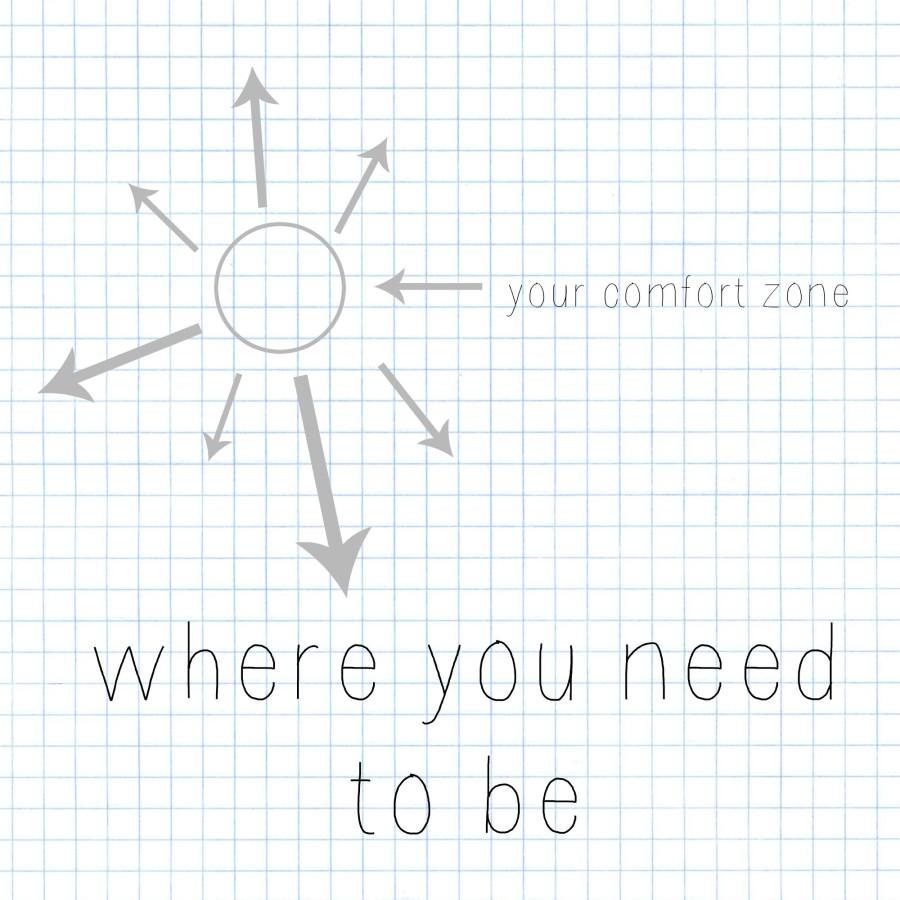 For almost everyone, comfort zones are, well…comfortable. They’re safe, pleasant, and stress-free to say the least. But the more people stay in their comfort zones, the harder it gets to push past it. One might ask why this is a negative thing, but the right question to be asking is why stepping out of one’s comfort zone is a positive thing.

First off, let’s start off with the basics of what I’m explaining here. A comfort zone is simply a person’s behavior that fits a certain pattern or routine that the person feels secure with, which feels like rolling into bed after a tiresome school day (ah, that’s great). That comfort zone expands into multiple aspects of one’s life, ranging from performing daily routines in the morning to carrying out social life with friends to doing sports and hobbies later on. Sounds great, but it lacks one key thing: innovation. And with the lack of innovation, there’s a pretty significant lack of risk, challenge, improvement, creativity, and even stress. (yes, I do mean stress). Sure, one’s life may be easily satiable or undesiring of change, which is understandable. Doing everyday things with a set schedule or knowing a decently accurate picture of one’s current life is helpful and weightless to one’s mind.

Innovation at this point seems to have a terrible connotation, but it shouldn’t. Please don’t misunderstand, but it really shouldn’t because all these things are actually healthy to one’s well being, which even psychologists say “a little anxiety may be just what you need to focus your efforts and perform at your peak”(Melinda Beck, Anxiety Can Bring Out the Best). Let me explain: risk isn’t doesn’t mean jumping off buildings or rebelling against rules, but it’s taking a chance for the better, not the worse. Taking a risk could mean trying to cook a new dish, or trying out a different hobby.

Challenges include pushing oneself. Going up to a new group of friends or trying to meet new people can be extremely terrifying at first, but they may end up being your best buddies later on, which you’ll never know unless you try.

Creativity is struck when we try to do new things, which expands one’s mind to achieve success. And contradictory to what most people may think, healthy stress, which doesn’t include the stress all of us DHS students get when cram-studying for a test the night before, is helpful in accomplishing tasks, and is key to being productive and reaching one’s potential.

Yeah, it might be different, and failure can keep hitting you in the head because you tried to innovate, but that’s why you keep improving every time you try. “Being slightly uncomfortable, whether or not by choice, can push us to achieve goals we never thought we could”(Alina Tugend, New York Times).

All of those aspects of innovation are caused by stepping out of one’s comfort zone. But every single one of us could relate to why it’s scary to, and all of us have reasons for it. But one extensive reason behind keeping the personal bubble from being bursted is that changing a lifestyle causes fear in people – fear of not knowing or understanding what that change will bring. If one tries to socialize with a new group of peers, who knows what the outcome will be? Rejection hurts, and many people don’t want to feel that embarrassment or grief. But without taking that risk, there’s no reward. You, yes you, may make the biggest mistake of your life by not doing something you should’ve. Bailing out on meeting new people, refusing to take AP classes, running away from trying out for a sport, procrastinating on asking that girl on a date, flaking a job interview, ignoring someone in need over fear of how others see you; all of these miniscule to momentous mistakes can easily happen and make you regret not putting yourself in an uncomfortable position that you’re not used to. And unlike satisfaction, regret stays with oneself for an unpleasant amount of time.

Instead of regretting, why not take that risk? Innovate your life, even if it seems hard at first. John Gardner wrote in his book Self-Renewal that “There is no learning without some difficulty and fumbling. If you want to keep on learning, you must keep on risking failure — all your life. It’s as simple as that.” Failure is going to happen, but accepting that helps us to take that challenge to push ourselves once again. I’m not saying it’s all sunshine and success after this: positives and negatives are going to be inevitable when stepping out of one’s comfort zone. But without that push, our inner potential, goals, and possibly even happiness, are a lot more difficult to achieve.

So take that leap of faith and step out of that zone. It’s bound to lead us somewhere, and where’s the fun in knowing what’s going to happen next? But keep in mind that “it’s important to remember that we don’t need to challenge ourselves and be productive all the time”(Tugend, New York Times).