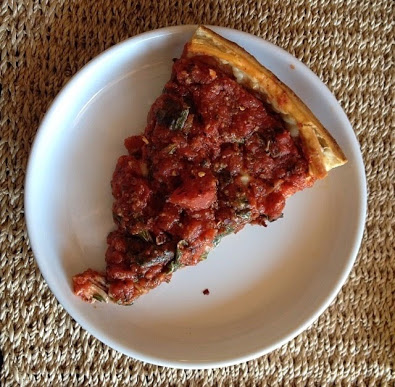 ABOVE: A slice of Zachary's Pizza.

If a person is hungry, sad, or even just bored, Zachary’s is the place to be. Zachary’s Pizza is a great place where students from Dublin High School can hang out and enjoy a slice. The pizza is served Chicago styled so it is very different from an average pizza. The texture and the way the pizza is cooked is more hearty and healthy. Domino’s or Pizza Hut is very different compared to Zachary’s.

Zachary’s Pizza is incomparable because of the way the pizza is made. Everything about the pizza right down to the crust is unique. Instead of having a flat crust beneath the pizza, Zachary’s crust is shaped as if it were a bowl. This could be useful because it holds everything together.

The pizza itself looks different because of the way it is cooked . Zachary’s pizza uses tomatoes instead of the marinara. This causes the pizza to taste fresh and healthy instead of greasy and unhealthy. Instead of a light snack, Zachary’s pizza is more like a heavy dish.  When students go eat at Zachary’s, they can expect a filling meal.

“I could have one slice and be full because it’s like a lasagna,” junior Patrick Kai said. “It is filling and good.”

The average pizza contains topping that are spread on top of the pizza, carefully placed so that every bite has something to go down with. On the other hand,  toppings in a Zachary’s pizza are all cooked together and are poured into the crust. This makes every slice taste the same.