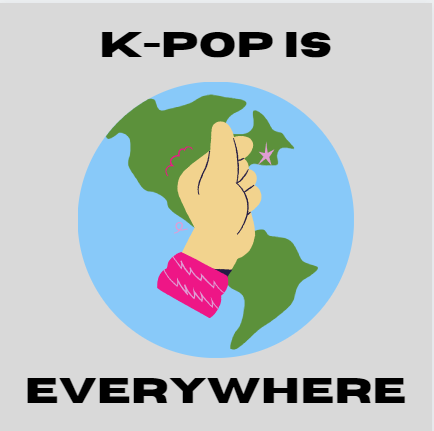 In the last 10 years, K-Pop has taken a legitimate place in American and global culture. Starting from PSY’s viral Gangnam Style, groups such as BTS and BlackPink have made millions from US audiences, opening their path from stardom to superstardom and doing the same for the genre.

Sonically, K-Pop is derived from Pop, EDM, and pop-rap sounds, but often pairs the aggressive grandiose music with more PG, family-friendly lyrics, making no reference to or at most leaving vague metaphors where an American artist might have referred to sex or drugs. Jeff Cheema, a senior whose favorite genre is K-pop, claims that this “innocence” is what drew him in. “A lot of the music the people around me used to listen to was very vulgar and talked a lot about drugs and other stuff. Kpop was a lot more innocent,” he explained.

K-pop has also been more than just music; it’s dancing, fashion, and music videos. Adyah Rastogi, another K-Pop fan, explains that one of the key appeals of K-Pop is that it’s not just a style of music; it’s a universe of content for fans. “It’s the whole thing,” she declares.

Perhaps most defining of the genre, however, is quite obviously its use of the Korean language in its music. But in these past couple years, K-Pop groups have begun to incorporate more English lyrics and American sounds, taking a dive into international appeal. American music, especially hip-hop and modern pop hits, however, do not maintain the universal family-friendly image that K-Pop does. As Korean pop groups make their way to the US market and work with American artists, how will they reconcile these differences? Will K-Pop artists undermine the underpinnings of their genre for lucrative new audiences?

Michelle Park, a Korean senior at Dublin High and an avid listener of K-Pop, describes the genre’s Americanization as the desire for more profit. “They want to make money in America,” she explains. When I push her to describe who “they” is, she responds by saying the ”entertainment agencies”. This response prompts her to take a deep dive into what exactly these agencies are and what they’re known for.

“So, the K-pop industry is very toxic,” she begins. “Over-working trainees, telling them what to do and not to do, controlling their diets, putting out all of these groups in hopes that they at least one will strike it rich and make money.” But, she emphasizes “the thing is, [these] are top agencies.” She describes this tier of agencies as the “the ivy leagues” or the ones that “have the most successful groups like BlackPink, BTS, Red Velvet, or Twice. The competition is fierce, each agency has a staple girl and guy group. “K-pop is very gender-specific.” When I ask her if there are any co-ed groups, she tells me something surprising: there’s the only one that’s big, KARD. And to her point surrounding the hierarchical nature of these agencies, she describes a very competitive environment. Everyone wants to see who can dominate the American industry first, who can be recognized. It’s very competitive”, Michelle repeats. She makes an interesting connection to the heavy production and consumerism; agencies just want to push more and more groups out. So, the rising absorption of American culture can be tied back to a desire for agency executives to make money. Is this enough for K-Pop to shun its conservative influences? To me, it seemed like there was a clash between remaining true to the conservative culture and making money. And, along the lines of conservatism, Michelle said one key phrase that stuck with me. K-pop is very gender-conscious. Though I hadn’t been able to ask her to explain at the time, I reached out again to get more insight into her comment.

I began our conversation by referencing back to this comment she had made earlier, with a focus on an aspect of K-pop that had always struck me as interesting. K-pop is modern, flashy, powerful, but it maintains a constant conservatism underneath. As an example, idols, the term that refers to K-pop singers, can not date publicly.

Michelle explained why, tying it back to Korean culture. “Korea in general is pretty conservative when it comes to social justice, BLM, and gender. Politics is very taboo in K-Pop. It is not allowed to be discussed publicly, and girl groups can face harsher censorship than male ones.”

Hae Chan Park, another Korean Dublin High Senior, also shared his knowledge of Korean culture with me, specifically drawing on how it influences K-Pop. He explains that the “older generation is extremely conservative; Korea doesn’t appeal toward liberal culture.” As a result, he says, mirroring Michelle’s points, “K-Pop barely covers anything in media or anything into a political ideology.”

This reality is a pretty big contrast to the American music industry. In 2020, it’s getting increasingly rare for artists to stay silent on political issues, or to remain completely PG. As Kpop groups venture over to the US, where there’s a huge market for new listeners, they have started to adhere to American norms to try to bring in new audiences. This has manifested itself as groups taking on more songs in English, often with American artist collaborations (Cardi-B, Jason Derulo, Halsey, Selena Gomez). These American artists often take a more explicit approach or bring up politics, meaning that the K-Pop collaborations do the same. For example, BTS & Jason Derulo’s collab on the remix of the song “Savage Love”  has a BTS member cursing and “Ice Cream” a song with BlackPink and Selena Gomez was criticized in Korea for having sexual themes. But more often than not K-Pop groups continue to keep a clean image, evidence of lasting influences back home and within the genre.

As globalization and technological development mean more cultural crossovers and more rapid exchanges of media, we can assume that K-Pop groups will continue to pursue new audiences, not just in the US, but across the globe. We might see this in other genres that continue to grow, like the UK’s rising Grime scene or in Japan’s J-pop. Either way, we are starting to be presented with what looks like crossovers leading to a substantial clash in conservative versus liberal values.

This article is part of Notes on Notes, a biweekly column dedicated to exploring culture, art, and media through a political lens.