Board Meeting Reveals Tension Between Board Members 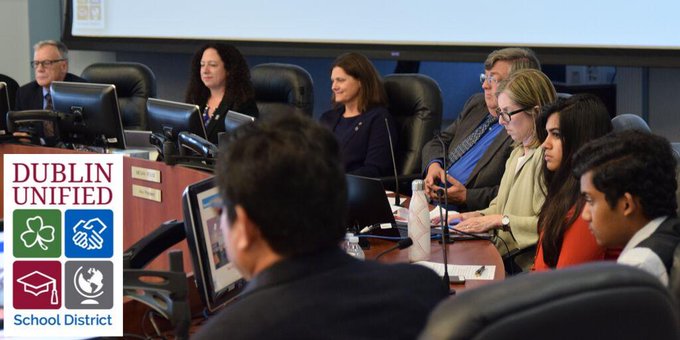 The school board at one of the first meetings following the start of the 2019-2020 school year, from right to left, Superintendent Dave Marken, Trustee Miller, Trustee Rouse, Trustee Cherrier, and Trustee Blackman.

The board meeting on September 24th, 2019, highlighted several prevalent divisions within the Dublin Unified School District (DUSD) board. Towards the end of the meeting, President Miller and Vice President Rouse were drawn into multiple arguments with Trustee Cherrier and Trustee Blackman. While the issues varied from polling data about the new bond measure to public perception of the school board, throughout these contentious discussions President Miller and Vice President Rouse affirmed their belief that Trustee Cherrier and Trustee Blackman were prioritizing the needs of the constituents in their area rather than the interests of all students.

Though Cherrier and Blackman actively denied the premise of these accusations and insisted that they were aware of student beliefs, Miller and Rouse expressed concerns that they appeared to be out of touch with the opinions of Dublin residents outside their respective areas. They further stressed the importance of acting now to serve current students rather than insisting on the construction of the second high school before any other decisions were made. While the Shield will be further researching community opinions on these specific issues, accusations of gaslighting and the aggressive nature of the board meeting made it clear that there are points of tension within the current board. With the upcoming election for the former Trustee Cunningham’s seat, it will be interesting to see the evolution of the board and whether these differing perspectives can be reconciled.

The Dublin Teachers’ Association (DTA) reflected on this tension in a statement stressing that “While [trustees] are elected by trustee areas, you are also elected to serve as the governing board for Dublin Unified School District. That means that your decisions impact the whole community, the education of ALL Dublin students at ALL 12 sites and the work of ALL Dublin employees.” (This statement primarily focused on bringing board members’ attention to the declining state of facilities at specific district locations, but the issue at hand was indirectly addressed.) When the Shield followed up with students about their thoughts on the board meeting, several students were unaware of the specific proceedings. When provided a little more context, however, they echoed the concluding sentiments of the statement from the DTA representative.

The dynamics of this board are still relatively new, as its newest member, Trustee Blackman, joined quite recently. The seat now held by Blackman was originally vacated last October when Joe Giannini resigned. At the time, the board voted 3-1 to appoint Niranjana Natarajan to the seat to represent Area 4, an area that encompasses a part of northeastern Dublin. After a petition led by a group of Area 4 residents to nullify this appointment resulted in a special election, Blackman was elected to the Board of Trustees in June 2019 with 69% of the vote to Natarajan’s 31%. The fifth and final seat on the board, too, still remains vacant due to the resignation of former trustee Dan Cunningham in March. Dublin residents Catherine Kuo and Malcolm Norrington are currently competing to represent Area 3 with this seat, which encompasses parts of central and eastern Dublin. This November’s election will evidently be important going forward considering the somewhat divided nature of the current board. The winner of this race could very well tip the balance one way or the other.

Despite current tensions on the board, students remained optimistic that the trustees shared a common purpose: improving conditions for Dublin students in order to foster an effective learning environment. Ultimately, students hoped that they will be able to reconcile their different approaches and conflicting values to best serve this shared vision.