A Night to Remember: The Irish Guard Hosts a Successful Invitational 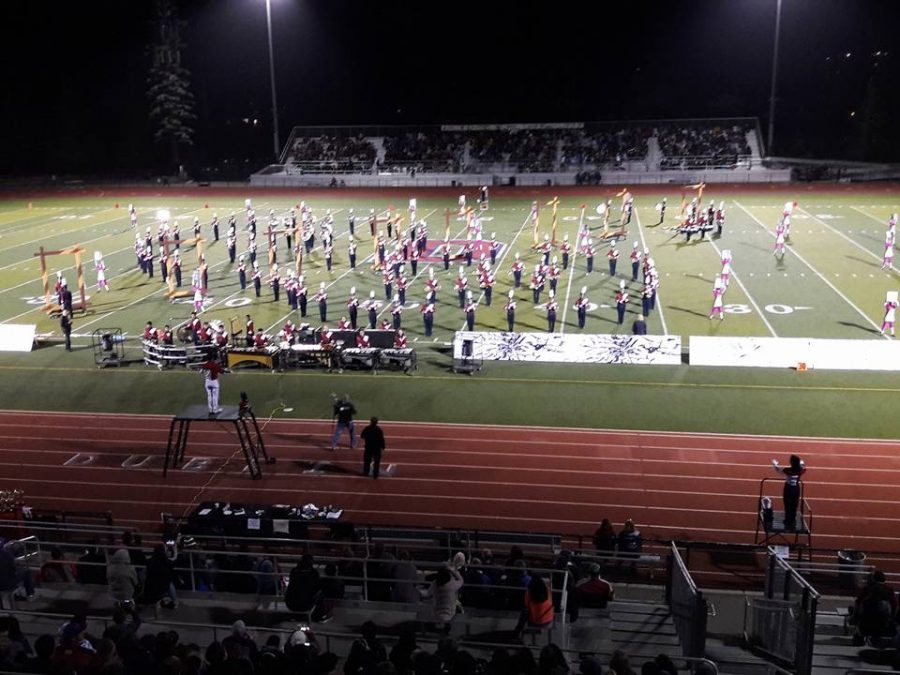 The Dublin High School Irish Guard marches onto the field, the bright lights of the football stadium illuminating their uniforms. Their field show is the last performance of the night. As the announcer asks the drum major if his band is ready, the crowd cheers and waits with anticipation. Once the trumpet solo begins, the audience is transported to a world with reflections and distortions of reality.

“I definitely enjoyed our performance! My favorite part of the show was probably the closer because everything from the morning came together. It turned out really nice,” said sophomore and percussion member Melody Wang.

The marching band and color guard performed their show “Mirror Image” at Dublin High School after rehearsing for more than two months. Ever since the first day of band camp, every musician put in tremendous effort to create impeccable forms and to play their music with expression and clarity. This effort resulted in a successful performance that many of its members were proud of. Freshman and baritone saxophone player Jackie Marotta even described the performance as exhilarating.

Sophomore and front ensemble member Hannah Lee felt the same enthusiasm. “The adrenaline rush right before the competition gets me excited for each show. Every season just gets better and better,” said Lee.

This performance energized the band and color guard. For the first time in many years, the Irish Guard won several first place trophies and a sweepstakes trophy. This year, its members hope to continue the victory streak and are excited for upcoming competitions.

“I always seem to forget how amazing it feels to perform under the stadium lights. I can’t compare it to anything else I’ve experienced. After our show, there was a moment where I realized that our band finally became one. I can’t wait to see what the year is going to bring us all as a group,” said senior and clarinet player Jenelle Barbier.

United by their passion to pursue music, the band and color guard has formed bonds and friendships that will last throughout the season. Many of its members consider band a family, and this has only grown after the new band director, Melissa Williams, joined the program.